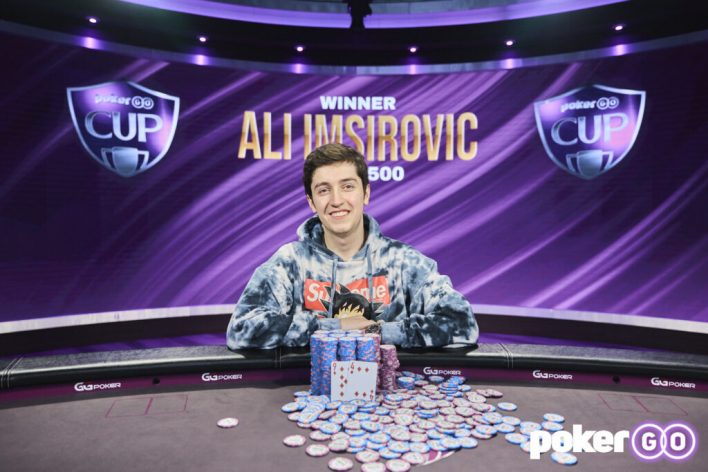 After Event #7 came to a close, Ali Imsirovic was left with all the chips and a cheque for $365,500. He also jumped to fourth on the PokerGO Cup leaderboard, closing in on Jeremy Ausmus who leads the field by a large margin.

Imsirovic’s victory here is just another in an extremely successful 12 months for the Bosnian pro.

There were 43 buy-ins in the prize pool for Event #7 by the time late registration came to a close. That came to $1,075,000 in cash, to be split between the final seven finishers.

The high stakes made for a player list that reads like a Who’s Who of the high stakes tournament circuit. Daniel Negreanu, Sean Perry, Stephen Chidwick, Sean Winter, Bill Klein, Nick Petrangelo, Gal Yifrach, and Jason Koon made up just a few of the players who busted before the cash bubble burst.

Imsirovic went into the final table with a comfortable lead. His stack of 2.7 million in chips towered over Sam Soverel’s 1.6 million in second place. The other four players were all sitting behind six-figure stacks.

Those two big stacks were eventually the only stacks in play. Soverel had slipped a little to about 1 million in chips, while Imsirovic had gathered up the other stacks into a mountain 5.4 million chips tall.

Heads up play didn’t last long. Imsirovic took most of Soverel’s stack with trips v. two-pair on the river. A pre-flop all-in saw to the rest of the stack.

“It’s still all to play for at the 2022 PokerGO Cup,” PokerGO tweeted. “After Ali Imsirovic took down Event #7 for $365,500 to keep his hopes alive of adding another big trophy to his already impressive resume!”

Everything still to play for

We’re deep enough into Event #8 at the time of writing to say that any player in the top 10 could still win the cup. Daniel Negreanu in 10th, has 210 points. Jeremy Ausmus in 1st has 504 points. The 296 point gap between them is more than covered by the 368 points for first place in Event #8.

However, Ausmus’s lead over the field is sufficient that even if he fails to cash in Event #8 no one can catch him without a first or second-place finish.

Just to keep things tense, at the time of writing Ausmus is still in the running with 13 players left in Event #8.

We’ll have the full results from Event #8 here tomorrow.