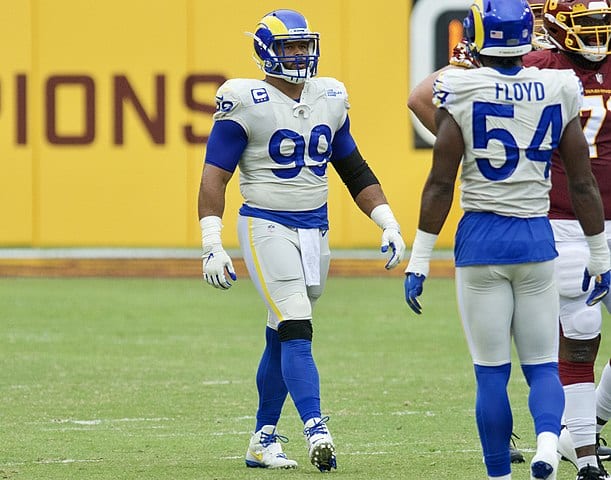 Heading into the Super Bowl yesterday, I predicted that it would be Aaron Donald that would be the decisive factor in the game.

It may have taken longer than I anticipated, but ultimately that proved to be the case as the Los Angeles Rams claimed a 24-20 Super Bowl victory over the Cincinnati Bengals.

However, it was Cooper Kupp, the outstanding wide receiver, who deservedly landed the MVP award for the game after a two-touchdown performance and for being the go-to guy late in the fourth quarter when the Rams needed a touchdown to take the lead.

For the Bengals, it was perhaps a story of so near but so far as they failed to capitalise on an explosive start to the second half, when it looked like they could have taken a stranglehold on the game.

However, the reason they didn’t is down primarily to the Rams defense and perhaps one overlooked play that may have seemed insignificant at the time.

Before that though, there was plenty of intrigue as the First Half of the game perhaps didn’t quite go as many had expected.

Aaron Donald was inevitable, Matthew Stafford and Cooper Kupp were clutch. Here’s what we learned from the Rams’ Super Bowl LVI win over the Bengals, via @kpatrahttps://t.co/dHFnIHMc5i pic.twitter.com/ogeekxSPxf

Rams Take The Initiative After A Quiet First Half

We have seen Super Bowls start with an explosive play on the first drive of the game, or even from the kick off, but Super Bowl LVI wasn’t one of them.

Both teams were forced to punt on their first drives, with the Bengals going for it on 4th and 1 and coming up short, handing the Rams strong field position in midfield.

The Rams made them pay as Matt Stafford found Cooper Kupp for a big gain before hitting Odell Beckham Jr. for the opening touchdown.

The extra point was missed though, and the Bengals reduced that lead to 6-3 by kicking a field goal.

However, in the second quarter, Cooper Kupp established a 13-3 lead for the Rams, before the Bengals cut the deficit to 13-10 with a trick play that saw Joe Mixon throw a touchdown pass to Tee Higgins.

Despite that good start the half ended on a sour note for the Rams with a potentially long-term knee injury ruling Odell Beckham Jr. out of the game from the second quarter and then on their final play of the half Stafford was intercepted when trying to hit Van Jefferson in the end zone.

The momentum seemed to be turning and ny just how much would become evident in the second half.

Half Time Show & Second Half Fireworks

After a superb half-time show from Dr. Dre, Snoop Dogg, Eminem, Mary J. Blige and Kendrick Lamar, who were joined by special guest 50 Cent, the second half began and it was the Bengals that grabbed the advantage.

First off, Joe Burrow hit Tee Higgins for.a 75-yard touchdown to put the Bengals in front just 12 seconds into the half, even if the play should have been nullified due to a missed pass interference call on the offense after Higgins clearly dragged Jalen Ramsey’s face mask to get clear of the cornerback.

Then on the Rams next series, the Bengals intercepted a deflected pass and although they could not turn the great field position into a touchdown, Evan McPherson did kick another field goal to put the Bengals 20-13.

With Beckham Jr. unable to return, the Bengals defence was stuffing the Rams

attempts to run the ball and they were also stifling Stafford’s attempts to find the receivers.

It appeared the Rams were struggling, and something needed to change if they were to get back into the game.

A third quarter field goal reduced the deficit, but it was a play by their defense in the third quarter that perhaps turned this game.

It looked innocuous enough, Joe Burrow escaped pressure in the pocket and ran towards the Bengals touchline but before he could get there, Aaron Donald reached him and gave him a fierce shove out of bounds.

That sparked a minor fracas on the touchline, but it seemed to fire up the Rams defense that had been somewhat quiet up until that point.

From then on Joe Burrow and his offense found the Rams a very different beast as Aaron Donald and company put the quarterback under huge pressure, meaning the Bengals could not add to their score.

However, late in the fourth quarter they still led and with the Rams unable to make much impact on the Bengals running game, it meant that the Rams had to focus on their most productive players.

That meant a heavy dose of Cooper Kupp and although the Bengals could see it coming, they were powerless to stop the Rams as Stafford and Kupp combined to move the Rams down to the Bengal’s 1-yard line where after a failed QB sneak, Stafford hit Kupp for the go-ahead touchdown.

That left 85 seconds on the clock for the Bengals to either tie or win the game and with their three timeouts still in place, Joe Burrow probably felt his chances of producing something were good.

The Bengals started the drive well, reaching midfield without too much of a problem but there they ran into Aaron Donald and the Rams defence.

On a crucial third down, as Perine seemed set to gain a new set of downs for the Bengals in Rams territory, Donald made a stunning one-handed tackle that stopped Perine a yard shot of the first down marker.

The Bengals now faced a crucial 4th and 1. The Super Bowl lay on the line. The ball was snapped and Burrow dropped back, but three Rams defenders were already moving in for the sack. Unsurprisingly, Donald reached Burrow first, bringing the QB down but not before Burrow tried a last gasp throw to Perine, but the ball fell short.

The play that sealed the Super Bowl!

The Rams then ran out the clock to claim their second Super Bowl in franchise history.

This is what winning the Super Bowl means to @AaronDonald97!#SBLVI pic.twitter.com/bYDwxnhjt0

For the Rams, it was a vindication of their unusual recruitment policy, but for the Bengals it was probably a taste of what could have been as they struggled to get their difference making wide receiver Ja’Marr Chase into the game.

The Bengals will come again, but for now, today belongs to the Rams.