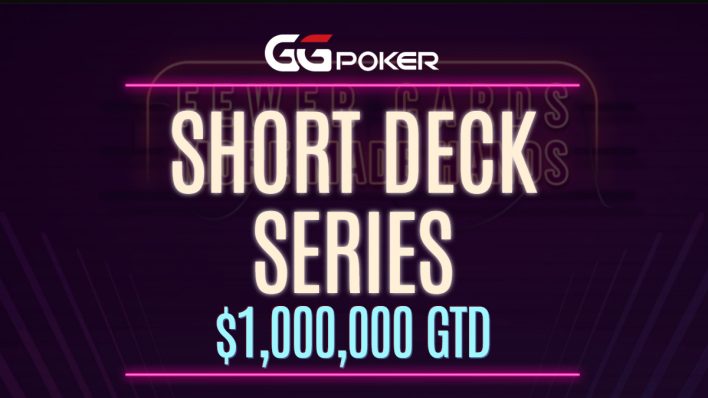 Fans of short deck, the poker variant played with a 36-card deck, are in luck later this month at GGPoker, where the Short Deck Series 2022 gets underway on Sunday, February 20. The eight-day short-deck festival runs through the following Sunday, February 27, and is the largest short deck-only online series.

It’s the second iteration of GGPoker’s Short Deck Series. GGPoker experimented with an initial series last July, catering to the variant’s surging popularity over the past couple of years. The game’s 36-card deck includes no deuces, treys, fours, or fives, and because of that, with fewer card ranks in play, the order of poker hand ranks changes from what’s standard for 52-card poker. Flushes beat full houses, for example, and the “wheel” straight becomes A-6-7-8-9.

Short deck is also played short-handed. Since it’s a draw-poker variant, and with only 36 cards available, it means that no more than five players can be seated at a given table. That in turn translates into plenty of action, since a given player is in one of the blinds at least 40 percent of the time.

Overall, the GGPoker Short Deck Series 2022 is guaranteeing a million dollars in prize money over the course of the series. $200,000 of that is guaranteed in the series’ bounty main event, which features a $525 buy-in and multiple flights. There’s another “mini main” bounty event as well, with a $52.50 buy-in. The mini main has its own $100,000, and the two events are carryovers from the 2021 short-deck series.

Bounty tournaments abound throughout the eight-day series. Each of the series’ eight days includes at least 15 separate tourneys or the opening stages (flights) into later events. Most of the events feature buy-ins between $52.50 and $525, but high-roller events are sprinkled throughout the schedule, at least once each day, with buy-ins of $1,050 and up (excepting a special $888 “Asia” high roller).

GGPoker cites these as the series’ highlights:

Short Deck Series 2nd Anniversary with a $1,000,000 Guaranteed Prize Pool.Continuing the legacy of $525 and $52.50 Bounty Main Events.Multiple Stacks per buy in (GGPoker’s N Stack feature) for anyone who wants to join the action.Live streaming from GGPoker’s SHORT DECK SQUAD throughout the series.Designed for players of All Levels, Skills and Bankrolls.

The complete series schedule is available here, and if you need a primer on the rules for short-deck poker, those are available here.