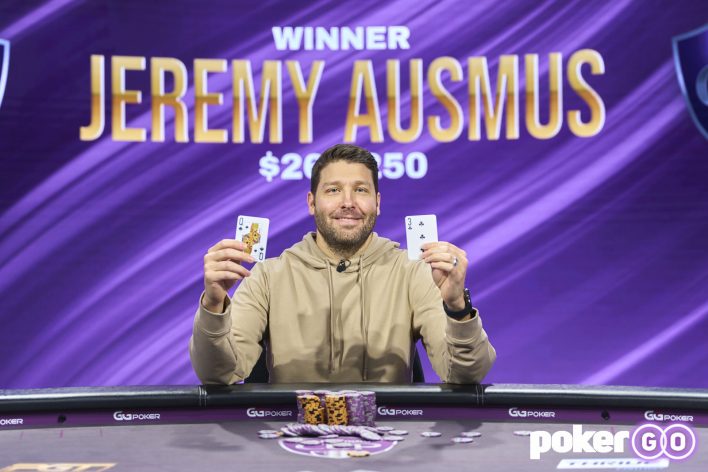 His back-to-back podium positions jumped him to the top of the PokerGO Cup leaderboard with both a solid margin and a bullet. He currently has 407 points, 113 points more than Cary Katz, who follows him in second place.

However, at this early stage, Ausmus is still just one big cash away from being dethroned. The other top ten players are all very much still in the running.

Among those competing for that $263k first prize were Seth Davies, Jake Daniels, Sean Winter, Stephen Chidwick, and Nick Petrangelo.

In a brutal run of bad luck, Daniel Negreanu became Event #3’s bubble boy, continuing his series of deep runs in these events, none of which have resulted in cashes. Not so far at least.

Negreanu probably has the worst hourly of the series so far despite stellar play throughout.

The final table had only been going for half an hour or so when a large threeway pot sent Jesse Lonis to the rail and Ausmus to the top of the chip ladder. With a comfortable lead over his four remaining opponents, Ausmus quickly went to work, using his big stack to keep his opponents at the edge of the ring.

One by one the seats were emptied and Brock Wilson took over as chip leader. When only Ausmus and Wilson were left, Wilson had the lead by almost two to one.

His lead didn’t last though, and Ausmus battled his way back into contention. Eventually, Ausmus had all the chips and Wilson had $195,000 — the prize for second place.

“On Sunday, @jeremyausmus earned his first victory inside the @PokerGO Studio,” wrote the PokerGO News Twitter account. “He topped the field in PokerGO Cup Event #4: $15,000 NL Hold’em for $263,250. Ausmus now leads the series leaderboard, and the leaderboard winner gets $50,000.”

Ausmus now leads the series leaderboard, and the leaderboard winner gets $50,000.https://t.co/UHuEWyXol6