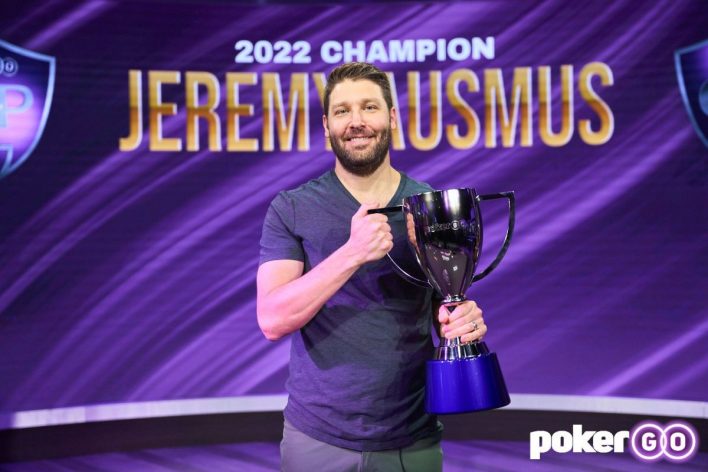 Sean Perry has taken down the eighth and final event in the 2022 PokerGO Cup, while the event’s third-place finisher Jeremy Ausmus emerged as the overall series champion. Perry earned $640,000 for his second win of the series, but finished just behind Ausmus in the series points race, 658 to 616.

Ausmus’s run to the overall series title included a win of his, two third-place finishes, plus one additional cash, for a total of $824,000, plus a $50,000 series champion. Excepting the champion’s $50,000 bonus, Perry actually slightly outcashed Ausmus during the series, logging $872,000 in payouts.

Ausmus’s overall series victory wasn’t secured until Perry busted Brock Wilson to end the event and the PokerGO Cup. Perry entered heads-up play with a large chiplead, yet had Wilson come back to win, he would have earned the series title, which would have pushed Ausmus to second and Perry to third.

The hefty points awaiting the top finishers in the Event #8 finale all but assured a battle for the series title, but as it turned out, all five players at Event #8’s final table had a mathematical chance to win the series-long honor. When Daniel Negreanu busted in fifth, however, it also knocked eventual fourth-place finisher Nick Schulman from overall series title consideration. Schulman could’ve only won the series championship with a near-exact order of finish, including himself as the winner and Negreanu as the runner-up. Similarly, once Schulman and Wilson both made the final three, Perry could win the event but not the overall series title.

“It’s great,” Ausmus said, after his overall title was secured. “It was a big sweat to win this. Everyone coming into the final table could’ve won it and I barely eeked it out.” Ausmus entered the Event #8 finale with the series lead, yet had to withstand all the combinations of finishes that could have sent the $50,000 bonus to another player.

Meanwhile, Perry’s solid series continued his recent form, when he finished third in the year-long PokerGO Tour race. Last year, Perry finished third behind the dominating runs of Ali Imsirovic and Michael Addamo. Perry’s strong showing in the PokerGO Cup events has in second place in the 2022 Tour standings behind early leader Nick Petrangelo. In Event #8, he topped a 32-player field for his largest win of the new year.

“You better believe it, for sure I am,” Perry responded when asked about his plans to chase the PGT Player of the Year title. “I took some time off at the beginning of this year, I missed a bunch of events, but this win has me motivated and they have something to fear.”

Perry was the only player to win two of the 2022 PokerGO Cups eight events. The other six event winners were Ausmus, Negreanu, Imsirovic, Wilson, Jake Daniels, and Daniel Colpoys. The final table and payouts for Event #8 were as follows: