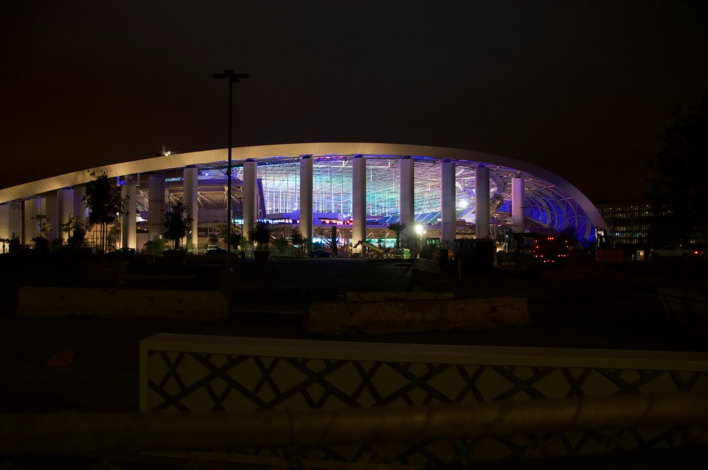 The Super Bowl is finally here. Last week, we had to endure a Pro Bowl that was actually a game of two-hand touch (seriously). Now, we get to see one unlikely team continue its magical quest for a title, while the Rams have an opportunity to redeem themselves after a complete offensive breakdown just a few years ago on the same stage.

The Playoffs Were a Roller Coaster

The last time we were here, we gave you 49ers +3.5 but once again, missed on the Bengals. When it was 21-10 with a first and goal for the Chiefs, things were looking great. From that point on, Pat Mahomes appeared to be deliberately throwing the game away. By the time the dust settled, the Chiefs suffered the greatest collapse we’ve ever seen in a conference title game.

The Rams vs 49ers game was much more what we expected it to be than what the AFC title game was. The 49ers controlled things in the fourth quarter, up ten, until a number of conservative plays left the door open for the Rams. The Rams took advantage, winning by three, but ultimately giving us the win at +3.5.

The Super Bowl is not only the most wagered-on sporting event every year due to it’s high-profile significance; it’s the most wagered game thanks to the plethora of bizarre novelty props. This week, we’ll have a wide array of both novelty props, as well as game and player props (and two paired team prop parlays).

I love this prop every year. For one, this wager is likely weighted appropriately. If you look at the players with numbers over #23.5 in this game, it’s both Cincinnati RBs (Mixon & Perine), Darrell Henderson, CJ Uzomah, Tyler Boyd, Tee Higgins, and the Rams TEs. For those under 23.5, we have Cam Akers, Jamar Chase, Van Jefferson, Cooper Kupp, Odell Beckham Jr, Swaronek, and both QBs. If the Rams score the first touchdown, we have about a 90% chance of winning this bet.

There are two absolute certainties in this game to consider. Both Coaches are getting Gatorade baths if they win, and both teams have two main team colors (Black/Orange & Blue/Yellow). The difference is, there is no Black Gatorade but there are Blue and Yellow Gatorades. With only one option to have from the Bengals side, the Gatorade bath in Orange Gatorade is the clear choice if Cincinnati wins. With the Rams, we don’t know if it’s going to be Blue or Yellow, so why guess twice here?

Given our other picks throughout this article, we like this choice as a hedge bet of sorts for all the Rams picks we have.

We’ve addressed the issues with the Rams defending shallow passes over the middle. One potential big play on the big day is Tyler Boyd. Boyd will likely have a lot of room to operate in three WR sets. Regardless of his snap count, we’ve seen games where Boyd gets more of a feature role, and this should be one of them. With Jalen Ramsey slated to secure one side of the field, it’s wise to attack the slot.

Last year, we correctly predicted the first reception in the Tampa Bay vs Kansas City Super Bowl. Now, we’re at it again, using a similar target strategy. The Rams weakness is their linebacking group. They also tend to really struggle over the middle in coverage within 10 yards. This weakness is well documented and should be a point of emphasis early for the Bengals.

By exploiting the short middle, they can hopefully open-up other areas by which they can attack. It’s an early strategy for the Bengals so Uzomah over the middle should happen early on their opening drive.

The majority of Tee Higgins’ routes lately have been intermediate routes on crosses, outs, and curls, just under this 11.5 yard range. Higgins is much more of a big-bodied possession receiver than anything else, so it’s very easy to imagine this man getting an 8 or 9 yard reception on a 2nd and 7 play. After all, that middle of the field on short routes is an area of concern for the Rams.

Okay, we know this is an extremely rare thing to happen. In the two years we’ve been picking scores on this site, we have 5 exact scores through two full seasons. That being said, if this game is Rams 30-14 late and the Bengals score, they’ll absolutely be going for two. In the rare chance this scenario creeps up, we could have a 30-20 game after that late score and then a failed conversion by the Bengals to bring it to a one score contest. Miracles CAN happen, even if they don’t effect the overall outcome of the game.

The Bengals just keep scraping by. Some Bengals fans may take that as an insult, but it should be taken as a compliment to their team for actually achieving success each week, despite flaws and unique circumstances. We can talk about the batted balls at the line the Bengals keep picking-off each week. We can also talk about the defense stepping-up at the perfect time, late in these games. The truth is, the Bengals are one game away from the Lombardi Trophy and that’s the reality we’re living-in.

The Rams finally exercised the demons in regards to their Sean McVay vs Kyle Shanahan narrative. After going 1-7 in the series since both coaches took their respective helms, the Rams are now looking to atone for their inept Super Bowl performance just a few years ago. With a star-studded roster, and a more experienced group of players and coaches, the Rams should be poised heading into this game.

As far as the matchup is concerned, the Rams have a slight advantage at most areas. Defensive line and Offensive line are key advantages for the Rams. Though the skill positions are closer to a split, keep in mind just how critical that offensive line and defensive line advantages are. Creating pressure can do a substantial amount towards disrupting offenses and forcing teams to adjust playcalling on the fly. This is where the Rams can really hammer the Bengals.

Remember the Titans game? The Titans sacked Joe Burrow nine times. Of those nine, the route patterns didn’t appear to change. Keep in mind, the Titans were generating interior pressure and the Bengals made no adjustments to shorten the routes. On the surface, it appears to be bad coaching on the Bengals behalf. One can only assume they won’t be so lucky dealing with Aaron Donald this week.

Expect the Bengals to attempt a more balanced attack. Short passes will likely be the way to go early. That short middle will be the target for the Bengals early. If they start to have success there and the safeties creep-up, the Bengals will likely try to take their shots when they can.

We do feel like the Rams will have a much less difficult time moving the ball, given the positional advantages they have. Based on the plus matchup with whomever draws Eli Apple in coverage, the Rams should cruise to a big lead and never look back.