[We pick up our conversation with Ben Adler not long after he moved up to the $2/5 games from $1/3[1] . He emphasized the importance of the usual basics, but also underlined game selection.]

“Well, there’s no one answer. Some of the regs are there all the time. There’s this one guy I see, every time I go in there, and I’ve played a lot with him. I’ve seen him show down hands twice. He makes Tommy Angelo look like a maniac. I don’t mind having him at the table because I know not to give him any action. But he’s what some people call a ‘seat plug’ – he takes a seat away from a guy in a Cubs jersey who’s on his third beer by 2:00pm.

“Exactly. But think about it. Suppose he’s making 5 BB per hour, which is perfectly achievable. That’s $50/hour, which is $200k/year income. Furthermore, he can eat free at the Bellagio – hell, he could probably live at the Bellagio on the comps, right? If he can stand to do that for 5-10 years (and still beat the game, of course) he can sock that money away, and be retired if he wishes.

“I mean, spending 4,000 hours sitting in the Bellagio wouldn’t be my cup of tea, but if you really enjoy playing poker and not much else, it’s a way to make a living. Where were we?”

“We were talking about $2/5 game selection, but that was much more interesting.”

“Ha, right. Yeah, I guess when I see 2-3 known regs in a game, I start getting loose in my seat, jumping up to see what greener pastures there might be.”

“Going back to this seat plug guy at Aria, is he beating the game?”

“If you were going to add on chips it would make more sense to have quarters.”

“Good point. Anyway, yeah, I think he’s beating the game, but he’s so absurdly tight, I doubt it’s for much. Maybe 3 BB/hour?”

“I should also mention the pro wannabes. They dress the part, down to the sunglasses and cool backpack. They look like pros but they don’t play like pros. And speaking of which, what’s with the backpack thing?”

“I have a little bag with my chips in it, and my phone charging cable, that’s it. Anyway, back to the pros and pro wannabes… I think part of it is that people see the vloggers playing $2/5, so they wanna play $2/5.”

“Well, to be fair, you’re not going to make a living playing $1/3, even if you’re beating the game.”

“No, certainly $2/5 is the lowest stake game where you’d have any hope of paying your bills. And it is true that if you are beating the game well, and don’t have any financial leaks, you can do okay. I know I’m making in a week here what I made in two weeks as a restaurant manager. With my low variance play style, and not having a pit or PLO problem, I do just fine.”

“It’s the most popular under-studied variant of poker right now. Everybody wants to play it, but nobody knows what they’re doing. So if you do know what you’re doing, you can print. Of course, you have to fade the variance, but if you can do that – which means having a massive bankroll – then you can really make a lot of money. But it’s not for me, thanks. 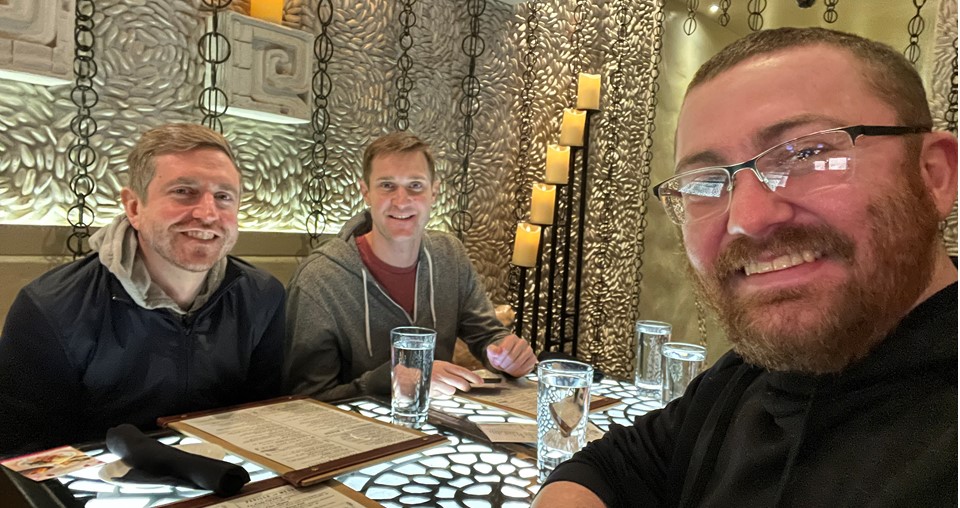 “Speaking of variance, you’re going out to L.A. for the Andrew/Brad meet-up game at the Hustler…”

“So, this is a true story: I’ve never set foot on California soil.”

“You’re making that up.”

“No, absolutely never. I love meet-up games, I love Andrew and Brad. This was an opportunity that I really couldn’t pass up. And they even offered to let me ride with them…”

“Those guys are the coolest.”

“I can’t say enough good things about them.”

“So is this just a chance to go set foot in California?”

“Pretty much. Obviously I’ve heard plenty of good things about California poker, and I figure if I can beat the Las Vegas games, I can beat the California games. I’ll be playing $5/5 one day, and $2/3 the other. That’s right in my wheelhouse, and I think I’ll play well. The results, hey, the results are what they are.

“It’s less than a four-hour drive. I mean… just to wrap it up, this is why I love what I’m doing so much now. It gives me the freedom to travel – to see California – when I want to. I don’t have to request the time off a month in advance, or try to swap shifts with somebody else, any of that shit. I just make my plans and go.

“And, importantly, I’ll be working – earning money – while I’m on vacation.”

“There might be a better way to end the piece than with you riding out into the California sunset with Andrew and Brad. But I can’t imagine what it would be. Let’s call this a wrap (that’s how they talk in southern California) and I am excited to get a trip report when it’s all done.

“For sure – looking forward to it.”

[Editor’s note: what you read in these articles is mostly transcriptions of phone conversations that Ben and I have. I wish I could convey here the level of excitement, joy, and pride in Ben’s voice in those last few paragraphs. At this moment in time, this young man is living his best life. It’s delightful to be the scribe for that.]